ClearLED has been nominated for DSE APEX award 2018!

The National Arts Centre in Ottawa (NAC) is a Canadian landmark, conceived in 1967, Canada’s Centennial year, as the premier showcase for the very best performing arts in the country.

In anticipation of Canada’s 150th celebration in 2017, the NAC launched a  rejuvenation project. The goal of the project is to establish a marquee tower (named “The Lantern”) that extends the geometry of the original architecture into the 21st century, establishing new transparency and connection with the city.

The ClearLED transparent displays were built to be visible to the thousands of visitors to Canada’s capital. These landmark displays will become a new canvas for digital artists from Canada and around the world to showcase their work and to promote Canada’s appreciation for rich and diverse culture.

The architecture of the new National Arts Centre building is uniquely shaped as a giant lantern. To light up the space, ClearLED was challenged with designing custom screens to fit the space precisely and deliver the maximum transparency and brightness. An additional hurdle was to ensure the components were lightweight, sturdy, and accessible for maintenance. The four blades had to be waterproof and withstand cold and wet Ottawa outdoor weather conditions.

The unveiling of the New National Arts Centre played an important role in Canada’s 150-anniversary celebrations and became a global spotlight. Although ClearLED started the project well in advance of the deadline, as 1 July 2017 approached pressure to finish on time escalated and all work crews on the project were working simultaneously, often in the same confined areas. Additionally, security on the premises was strictly enforced, making access to the facility a challenge without planning ahead.

Planning was critical to success. The project was started a year prior to launch. ClearLED formed a dedicated project team: project manager, creative designer, technical engineer, and installation lead. The project required multiple face-to-face meetings in Ottawa with our client and careful oversight of the display build at ClearLED’s factory in China.

Over 400 LED panels were customized and designed to fit each section of the glass building, with over 13 uniquely customized model types. All panels were individually fit and quality-tested to mitigate problems during installation. ClearLED selected high-quality Nichia LEDs to ensure long-lasting light hours and to endure Ottawa’s weather conditions.

The project and installation team were well-prepared in advance with security clearance. Materials were shipped and cleared customs early. During the installation period, the team resided in Ottawa and maintained continuous contact with our client to schedule access and minimize clashes with other trades. 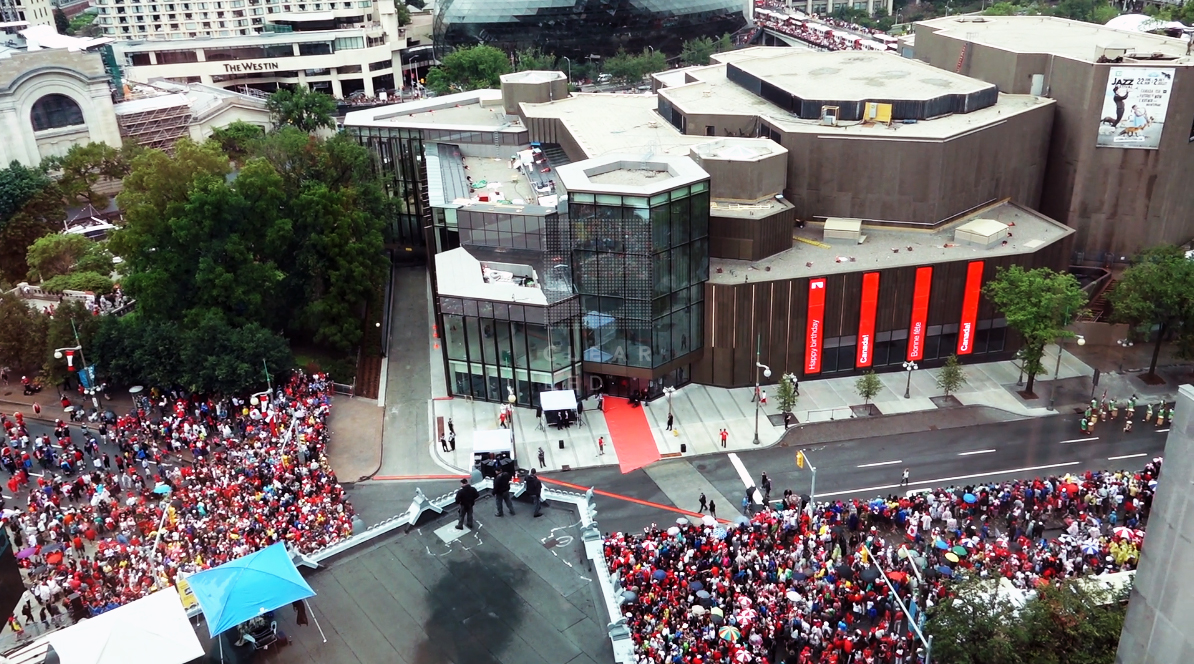 The installation was launched on schedule, 1 July 2017, to celebrate Canada’s 150th anniversary and attracted national media coverage. The celebrations were attended by over 350,000 visitors who were able to view the stunning lantern display as an icon of Canada’s rich culture.

Since then the National Arts Centre has been using this new permanent installation to show off its spirit and community support. E.g., during October screens were designed to support World Mental Health Day and this support has been noticed and captured on multiple social media platforms.

The National Arts Centre is planning to use its ClearLED installation for the countdown to 2018 on New Year’s Eve, again this will be exposed across TV channels to millions.

Along with the help of Moment Factory creating unique display contents, the ClearLED installation became a memorable showpiece that will be viewed by Ottawa residents and visitors to the capital—up to 5M* per annum.