CES Trends: MiniLED And Is It Better Than OLED?

With LG’s recent announcement that the company would be unveiling its first QNED MiniLED television at virtual-CES, TCL, and Samsung also revealing similar display technologies at the show, many consumers are wondering what the hell "MiniLED" actually is and how it relates to current display technology. And this confusion is perfectly warranted, especially given how many marketing terms in the flat panel display market already include some variation of "LED."

In a nutshell, these new MiniLED displays are still LCD-based televisions that will sit in price and performance between the budget end of the market and the more premium space that OLED televisions currently occupy. The monikers that LG has chosen for said televisions simply describe the technology used to elevate performance to a level that’s worthy of something selling in an elevated-but-not-flagship price segment. The goal here is to try and bridge the gap in performance offered by OLED, and in some ways exceed it. But how, exactly?

The ‘Q’ in QNED signifies quantum dots, a technology invented back in the 1980s at Bell Labs. Quantum dots are man-made nanoparticles that have semiconductor properties and are primarily used to enhance the color performance of a display. Prior to HDR, stock color performance offered by most LCD televisions provided enough saturation on their own to faithfully recreate the video content being played back. But with the advent of Ultra HD Blu-ray and HDR streaming services pushing the requirements for accurate color rendition even further, a lot of R&D has been put into this decades-old technology, finally putting these nanoparticles to good use.

To properly utilize quantum dots, they’re applied to a film layer that’s then sandwiched between the LCD panel and backlight. The dots themselves are insanely small, ranging in size from 2 to 10 nanometers in width. When the display’s backlight hits them, the size of the quantum dot dictates the wavelength of light it emits, ultimately providing an exact color designed by the manufacturer. Larger-sized dots emit light that is shifted towards red, with the exponentially smaller dots emitting light that is shifted more towards green. Through this implementation, colors not only become more saturated, they also become more predictable, allowing companies who use them an inherently more accurate image with less performance difference between each display.

Additionally, the quantum dot effect on color stays even when a high-brightness backlight is used. With current OLED technology, deep, saturated colors are an inherent quality, but only below a certain brightness threshold. Quantum dots are less fussy, allowing enhanced color performance at extremely high nit-levels, up to at least 4,000 nits. 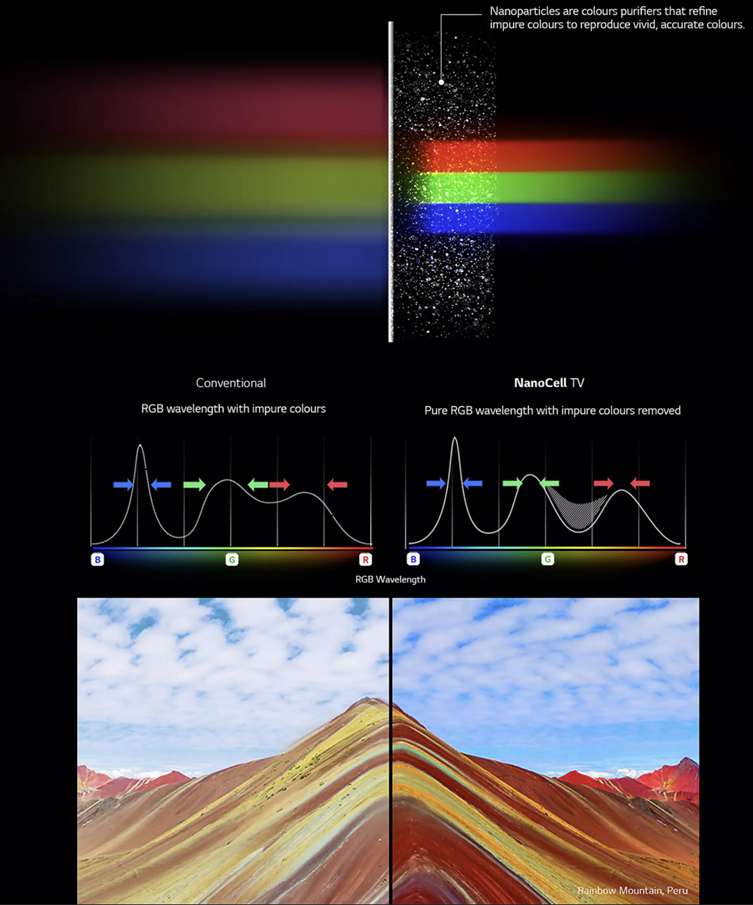 Then there’s the ‘NED’ part of the acronym. This is a reference to LG’s proprietary NanoCell LCD-panel technology. Such displays feature an IPS LCD panel with enhanced color and viewing angle properties. Historically speaking, LCD displays have had issues keeping colors and contrast consistent as you move off-axis from the center of the image. This means viewers sitting on the left or right side of the couch might be seeing a completely different image than those viewing from front and center.

More consistent image quality at off-axis viewing angles is another one of OLEDs strengths, but with NanoCell technology, LG is attempting to bridge this gap, too, by applying another film layer of nanoparticles on top of the LCD panel to absorb unwanted stray light at particular wavelengths. This not only enhances the purity of color and contrast on-axis, it helps to keep this enhanced performance at wider viewing angles as well, with a more consistent image that has better color rendition and an image that appears less washed-out.

But what about MiniLED? This shouldn’t be confused with microLED, a display technology more closely related to OLED than QNED, that’s used primarily for digital signage and large-format theater displays. MiniLED is a newly developed LCD backlight and dimming technology display manufacturers have recently adopted  meant to help bridge the gap in contrast performance between LCD and OLED displays currently on the market. Today’s LCD panels cannot produce a true level of black on their own, so dimmable backlights are used as a means to boost contrast performance. 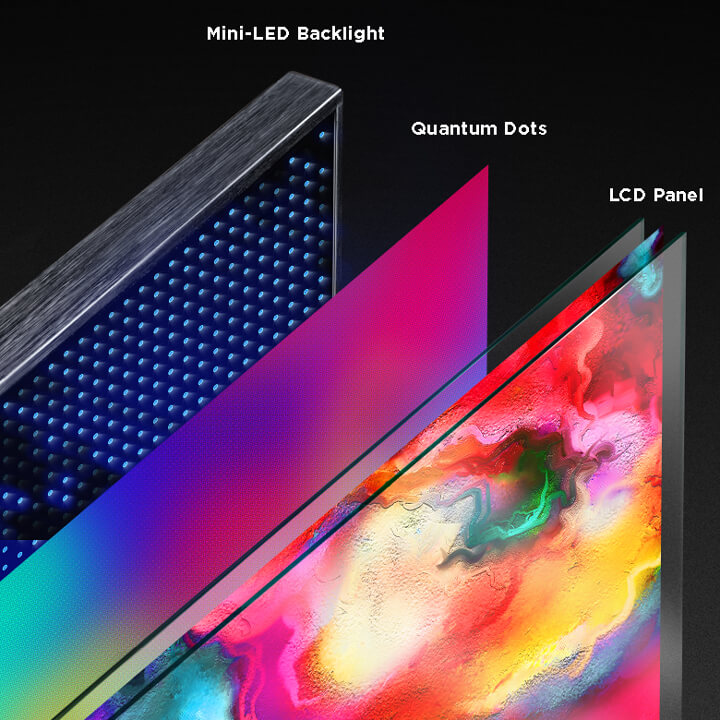 Unlike more traditional edge-lit or full-array local dimming (FALD) backlight technologies, MiniLED ups the ante, going from tens or hundreds of individually addressable LEDs to tens of thousands. LG’s own MiniLED backlight solution consists of up to nearly 30,000 LEDs that can produce phenomenal peak brightness and a claimed contrast ratio of 1,000,000:1.

These LEDs are supplemented by up to 2,500 individually addressable zones to provide advanced local dimming, providing a smarter and more seamless dynamic contrast system that removes many of the inherent problems previous techniques had, such as blooming, a halo artifact where pixels surrounding a bright object appear brighter than they’re supposed to be. With more addressable zones for controlling the backlight, MiniLED lessens these artifacts dramatically. MiniLED is also scalable, adapting to displays of all sizes, making it a great backlight option for all LCD-based displays as we move into the future.

Is MiniLED or OLED Better?

But how exactly does QNED MiniLED stack up to current OLED displays? It’s a bit of a tossup really. While the self-emitting pixels found on OLEDs produce true black and a mesmerizing level of contrast within the image, OLED is rather limited in overall image brightness. Most OLED panels on the market today top out at around 600 to 700 nits of peak image brightness, and that’s only if roughly half of the pixels, or less, require them to be that bright for short periods of time. If more than half require this much brightness, the television’s auto-brightness limiter (ABL) kicks in and reduces pixel brightness down to about 200 nits, depending on the exact television model in question.

ABL must be engaged, otherwise the pixels have a tendency to degrade and lose performance. And just like with plasma televisions, OLED can be prone to image retention, more commonly referred to as burn-in, where a ghost-like image can remain stuck on-screen from static imagery that remains displayed for too long. Most OLED televisions have countermeasures in place to prevent this from happening, but it’s not foolproof.

LCD-based televisions are not prone to image retention and most offer far higher image brightness (up to thousands of nits more) that isn't limited to a specific percentage of pixels, thus potentially providing more dynamic range required for certain types of HDR content.

If you have the budget for either type of television, the question you should be asking yourself is – do I want a higher brightness display or one with higher contrast? If you prefer to watch with the lights off, OLED is probably still the better choice. But if you’re viewing with the lights on or in an environment with lots of sunlight, the higher image brightness provided by QNED MiniLED is probably the better choice, as it cuts out a lot of the ambient light within the room that ends up hitting the screen, potentially providing a more subjectively pleasing image.

With the combination of an advanced backlight array of thousands of individually addressable high-brightness LEDs, enhanced color performance, viewing angles, and image accuracy thanks to quantum dot and NanoCell technologies, there’s a strong argument to be made that this may be close to the peak level of performance that LCD-based televisions can achieve and at some point will be replaced by a new, cheaper display technology in the segment of the market where these televisions currently sit.

But that display technology may already be here. Samsung has recently announced plans to enter the large-format OLED market with their own less-costly and brighter variant of OLED displays. Samsung hopes to simplify the typical OLED manufacturing process by reducing the number of material layers necessary to produce a working OLED television from 22 to 13. Samsung says this will nearly quarter the cost to manufacture an OLED panel. They plan on using quantum dots to help increase image brightness and to filter the light that these now-missing layers would have done. Samsung’s $11 Billion investment in developing quantum dot OLED panels will start two production lines in South Korea between now and 2025, with the company aiming to start production sometime in 2021. So it may be that QNED MiniLED flat panel technology may be short lived indeed.